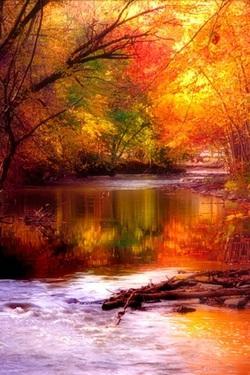 Monday, September 22nd is the Fall Equinox in the Northern Hemisphere. Equinoxes are points within the wheel of the year that we have a moment of balance, when the light & the dark are on equal footing. Once that moment passes either the light or dark has the upper hand. At the Fall Equinox the dark begins to rise. The Sun moves into the cooperative sign of Libra and the dark half of the year begins. We are in the process of counting the fruits of our labor, both metaphorically and actually.

At first glance the chart for this Equinox may seem quiet, yet it has a subtle and powerful undercurrent permeating it. There are two major astrological occurrences that happened shortly before the Sun moves into Libra responsible for creating that undercurrent. One day prior to the Equinox, Mars, the planet of action makes a last quarter square to Neptune, the Great Dissolver. This is one of the more challenging aspects in astrology. Mars likes a goal, an aim, a purpose, especially in Sagittarius, which is the sign of seeking out the truth and finding a guiding principle which to follow. Yet Neptune as the planet that dissolves boundaries, interactions between these two have confusing and generally unforeseen consequences. What you think you’re getting into, is actually not where you find yourself . This author cannot help but connect this aspect to the September 10th speech President Obama made about combating ISIR.

As if the connection between Mars and Neptune isn’t enough of a stickety wicket, the fact they are in a last quarter square to each other adds a flavor of doubt all by itself. Last quarter squares between any planetary pair deals with a questioning of conventional wisdom. Called a crisis in consciousness we come to ask ourselves, is what those in authority saying what we consider correct based on our own experiences?

The other occurrence happens just 2 hours before the Fall Equinox as Pluto changes direction. Pluto, which had been retrograde since April 14th, turns direct. Because Pluto is so distant from the Sun it takes around 7 days to change direction from the point of view of planet Earth. In reality no planet moves backwards, it only seems that way from our perspective. In that time a lot of energy is produced, not unlike the stretching of a bow back just before the arrow is released. The possibility of seismic activity, whether actual or metaphorical is very likely. Pluto in Capricorn, as a theme is transformation of power structures.

It shouldn’t take too long to see the results of either of these influences. Within a few days of the Fall Equinox we have a New Moon in Libra, that means that this Equinox occurs during the dark of the Moon. A natural time to tie up loose ends and release

As I have said before the Old Paradigm is falling away, and the New Paradigm is being formed. Focusing on what you want to see, feel or be is one way we can exert our own power. Feelings of powerlessness is normal during times of great change. Yet if we continue to see ourselves as victims of our circumstance, instead of creators of our circumstances, we will continue to give our power away.

One of the major themes of Libra is just that, giving your power away, often to keep the peace. Yet Libra is also about equality and working together for a more equitable future. That’s the part of Libra we need to focus on as we move forward. Let’s take this opportunity and continue to build a world based on fairness and equality. We can no longer wait for those in charge to do it for us, It’s up to us to do it for ourselves through cooperation and love.