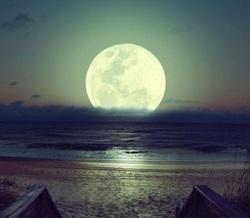 On August 10th there is a Full Moon in Aquarius. At the Full Moon the Sun and Moon are the farthest apart from each other along the 360 degree circle. This affords us perspective as the Moon is fully illumined by the Sun. With the Sun in the sign of it’s rulership, Leo, this is a particularly powerful Full Moon on it’s own, yet this Full Moon is also a ‘Super Moon’ meaning it is the closest to earth and therefore the brightest and biggest Moon we will see. Whenever a planet is closest to the Earth, as when any planet goes retrograde, the energy of that planet is more accessible to us on an energetic level. The Moon in Aquarius helps us to gain perspective on the idea of how we interact within groups. Aquarius can be a mentally restrictive sign, or it can be an incredibly ‘out of the box’ sign, depending on what side of Aquarius you resonate. Aquarius was traditionally ruled by Saturn, the planet of structure and yet the modern ruler of Aquarius, Uranus, wants nothing more that to break out of structure. So at this time we will see both sides of the Aquarian Archetype. So expect some resistance and a few explosions. Yet, resistance is futile, as evolution continues on and the Uranian side of Aquarius wins in the end. That means progress will be made, as to how much that will ‘cost’ us is yet to be determined.

This Full Moon axis is in a tight square to Saturn. Saturn in Scorpio symbolizes both the transformation of reality and the resistance to that transformation caused by fear and mistrust. In Scorpio we come to terms with forces greater than self, no the least of which is death, and so we see this frightening specter each time we turn on the TV and watch the news. For those of us who live in less war-torn areas Scorpio can symbolize a more metaphorical death and rebirth. Either way we are dealing with the fixed modality. Each of the 12 signs of the Zodiac has either one of three ‘qualities’ of energy, Cardinal which is initiatory, fixed which is stabilizing or mutable which is changeable. When we are working with the fixed modality we are dealing with long standing and emotional issues. We can see this in the conflict between Israel and Palestine, an ancient conflict that predates the formation of Israel in the 1940’s by thousands of years. And within us all we have a little bit of that Israeli/Palestinian conflict brewing, just as ancient and just has fearsome. This Full Moon helps illuminate that for us.

Uranus, now in initiatory Aries also interacts with the Full Moon axis, but in a more supportive way. Uranus sextiles the Moon, opening up the door to a more progressive and equitable cooperation among people, releasing old ideologies and embracing a more humanitarian way of being, reminding us that we are in fact each other’s keepers. Uranus also makes a flowing self-expressive trine to the Sun in Leo. There are a plethora of creative ideas that can help us to work toward a more life affirming (Sun) Future (Uranus).

And Lastly, Saturn and Uranus, the co-rulers of the Aquarius Moon are in a rather long standing inconjunct aspect to each other. Inconjuncts require us to make adjustments. With Saturn and Uranus we in the process of breaking down the structures of society that impede our evolution. By evolution I’m referring to out journey towared oneness and unity. This waning or releasing aspect requires us to make the emotional adjustments necessary to learn to work together. Emotional shifts are the most difficult for us culturally because we are taught to ignore our emotions, to get over things and move on. Yet we are so deeply wounded that unless we dig for the wound, bring it up to the surface and heal it in the light of day we will destroy ourselves.

The Sun in Leo reminds us that it is Love that leads the way, without the beating heart all of life ceases. If we can open our hearts to the joy of living get perspective on the emotions that drive us and heal what needs to be healed we can not only survive this time, but thrive doing it.