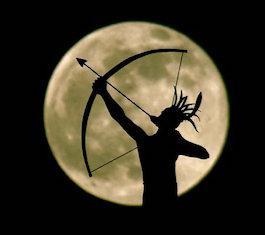 On May 21st there is a Full Moon in the sign of Sagittarius. Full Moons are times of culmination when what was seeded at the New Moon (New Moon 17 degrees of Taurus on 5/5/2016) come to fruition to be disseminated into the world. With the Sun in Gemini and the Moon in Sagittarius the themes of truth and lies, beliefs and ideas, and logical and intuitive thinking are highlighted.

The Sun in Gemini stimulates conversation and the Moon in Sagittarius can show us how we either are open to beliefs beyond our ken, or how stuck we are in our belief systems. Mars now retrograde in Sagittarius is conjunct the Moon and will have it’s biennial opposition to the Sun tomorrow, This will occur at the same degrees of this Full Moon, putting energy where our beliefs are. Although with Mars being retrograde we could reconsider our actions and see patterns as to how our beliefs have created the situations we find ourselves in.

The energy of the time we find ourselves in is very malleable. As with the New Moon in Taurus on May 5th we still have a mutable t-square with Jupiter, Saturn and Neptune. This configuration brings awareness as to what needs to be healed on both a physical and spiritual level, while old structures of power and the beliefs that kept those structures in place dissolve away. While this occurs the Grand Earth Trine that was part of the New Moon in Taurus remains active in the sky as Mercury in Taurus has taken the place of the New Moon and trines both Jupiter and Pluto. We have the resources to build the structures needed for the paradigm shift to take root.

Keeping an open mind will go a long way at changing things. As the personal planets, Sun, Moon, Mercury & Venus begin to move through Gemini, each will take their turn in filling out the mutable t-square, giving us plenty of perspective and ideas on how to make our world work better for all concerned. Revolution is in the air and the winds of change are blowing hard. Almost anything, except maybe for the status quo to keep a hold of the reigns, is possible. Don’t believe what you hear from the usual sources of information, they have to much to loose to speak the truth of things. Instead, believe what you feel and no matter how magical you may think you thinking is, think it anyway for we are moving into a time when Magic and imagination is becoming more and more powerful!