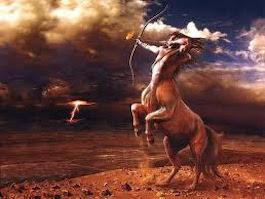 On June 20th there is a Full Moon in the Sign of Sagittarius. With the Sun in Gemini and the Moon in Sag our attention is being directed to our ideas and our beliefs. Full Moons are culmination times when the seeds planted at the New Moon are revealed ready to be disseminated among the people.

This Full Moon is especially potent for a number of reasons. We have a another grand mutable square with Mercury, Jupiter, Saturn and Neptune which challenges the ideas and beliefs that structure our reality. Does the old world view still make sense? Is it time to stop the fear mongering and start to work together toward unity, exploring those things that unite us instead of divide us?

Mars which is for all intents and purposes standing still, is making a trine to Chiron in Pisces. This connection is one of the dissemination of knowledge. What do we know to be true around issues on wounding and sexuality? Are we seeing the patterns and the ways to heal those patterns? There is no coincidences that those societies who have the most unhealthy relationship to sexuality are often the most violent and misogynistic.

Mars is also in an inconjunct to Uranus and Eris in Aries. Uranus and Eris made the first of 3 conjunctions back on June 9th. Uranus is the unexpected, the revolutionary and the explosive. Eris is the energy of Discord, Feminine anger and revolution. The last time these two planets conjoined was 90 years ago (also in Aries). The feminine is rising, she will not be denied her rightful place next to masculine. We can no longer live in a world where half of the population has no voice. Even in first world nations like the US, women’s rights are not guaranteed. In fact they are being eroded by the old boys network that is terrified of the power of the feminine. Why else would they care what a woman does with her womb?

In plain speak this Full Moon is a powder keg of revolutionary energy. It will not be easy to keep your balance at this time, although do the best you can. Issues of victimization will come to the forefront.

In case you haven’t heard, the old ways are falling apart, they can no longer sustain themselves. Naturally those in power don’t want to let go of power and they will go kicking and screaming. Yet fear and conspiracy theories will not serve us. Feeling powerless against anything is the old way. We will never go back to the way things were. We are living in a new world, in that fertile time when the old is almost gone but the new is still in it’s infancy.

Our choices will determine our future. It’s time to write our own stories, don’t let them tell you peace is a pipe dream and taking care of one another is an evil socialist agenda. We are our brothers and sisters keepers. We are stewards of this beautiful planet. Let’s all grow up, take responsibility for ourselves and our situations and work towards a world we can all live with and live on!