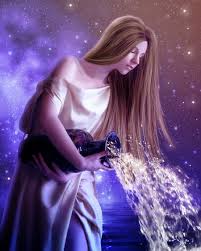 On January 20th there is a New Moon at one degree of Aquarius. New Moon’s are times of planting seeds of intention. Aquarius is the sign of the rebel. The one who chafes at the restrictions of society. Aquarius is also the sign of the genius, the one who can see beyond the structures of reality to a bigger more holographic picture.

Aquarians can be of two types, a reflection of the co-rulers of their sign Uranus and Saturn. They’re are the ‘out of the box’ thinkers, those who break free from the structure of society and look at things from a bigger more holographic manner. These are the Uranian type. Then there are those who like to stay within the structure of reality less open to the process of individuation. These are the Saturnian Aquarians. We will see the expression of both of these types of Aquarian world views arise.

Uranus the rule breaker ruler is in Aries (since 2010-2011 until 2018) As part of the historic Pluto/Uranus square (2012-2015) it is partly responsible for much of the chaos and all of the uprisings against oppression that we see in the world. Yet Uranus is at the moment conjoin the South Node of the Moon in Aries. The South Node is the point in a chart where we are required to let go of old ways of behaving in order to evolve. Yet what could that mean for progressive Uranian Aquarius? Well part of signature for the Uranian Aquarian can be rebellion for rebellion’s sake. So tearing down structure just because you can would not work or further our collective evolution.

What will help us move forward? We look to the North Node in Libra, a Venus ruled sign. When we look to Venus in this New Moon chart, low and behold she is in Aquarius! Venus is the planet of relationship and in Aquarius we are talking about friendship and being around people of like mind, most preferably with humanitarian values.

Well what about those Saturn ruled Aquarians we talked about. Well Saturn is now in open minded Sagittarius. Sagittarius is about expanding your understanding of the world. Learning about people that are different from us. And having a view of life from the largest view possible.

What stands out in this chart is that Saturn is the only planet that aspects the Sun/Moon conjunction in Aquarius. The aspect is an opportunistic sextile which not only opens the lines of communication between us but also offers opportunities for becoming more progressive in our thinking.

There is a lot wrong with the world and how it is structured, yet there is also a lot right with the world. Especially when we work together for the common good. We are not a lost cause, we are co-creators waking up to that fact. Only we have the power to change the world, from the inside out and the grass roots up.