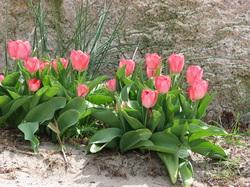 New Moon in Aries: In the Beginning there was LOVE….

March 30th is the New Moon in Aries. All New Moons have an Aries quality to them, the quality of newness, the archetype of emergence and being-ness.
When the New Moon is actually in Aries, we could say, this is the beginning of the beginning.

When the Sun moved into Aries back on the 20th of March we began to sense a stirring of the energy, yet the real ball doesn’t start to roll until this New Moon. In part due to the fact that the Sun and Moon are also in conjunction to Uranus in Aries. Uranus always adds the unexpected to the mix. It’ is said that you cannot prepare for Uranus, you can only pick up the pieces after it has made itself known. So this can be a very explosive time.

We also need to take into consideration what the ruling planet of Aries is doing in the New Moon chart. Mars is the ruling planet of Aries and Mars is moving retrograde in Libra. Mars doesn’t really like being in Libra, and definitely doesn’t like being in Libra retrograde. This forces Mars to take considered action. The ‘old way’ of shoot first, ask questions later will not work with Mars retrograde in Libra. In fact if Mars does pull a gun, he is most likely to shoot himself in the foot!

This New Moon is part of the Cardinal t-square that has been gracing the heavens since the end of last year. This configuration requires us to take action on a personal as well as cultural level. We are aware of who holds all the cards when it comes to perceived power. We also realize that those in power would like us to continue to feel powerless. Yet the truth of the matter is that we have enormous power especially if we work together. Something Mars in Libra is trying to tell us.

Part of the process of reclaiming our power has to do with examination of our family dynamics. Jupiter in Cancer (since June 2013) has been causing us to explore our feeling nature around family, nurturance, women’s issues and cultural conditioning. Family dynamics are based on cultural norms, and we are imbedded in a patriarchal culture that does not value the feminine, the emotions or the earth. And so those in power feel as if the earth is theirs to do whatever they wish, women are baby machines to pump out soldiers for their wars, and being emotional means you’re crazy.

Well we’re not crazy, the earth belongs to everyone, and you cannot have our kids!

This New Moon is an opportunity to put forth a New Paradigm. One based on equality, fairness, compassion and love. It will take time, although maybe not as much as we think, to see these changes. One thing for sure, is we have to start somewhere and at some time. Well the where is here and the time is now. So as we set our intentions for spring, let us plant the seeds of transformation based on love. Hate has gotten us to the brink of annihilation. It’s time to try something New and there’s no better time than when the Sun moves through Aries!