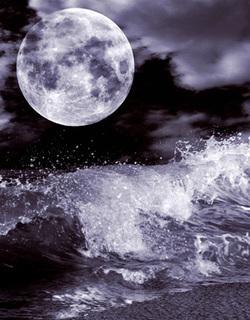 Before we can really talk to the New Moon in Aries that occurs on April 10th at 5:35 AM EDT, we need to examine the energetic soil in which this new seed is being planted.

At the begriming of March three was a planetary alignment in the sky called a Yod or a Finger of God configuration. This particular alignment was a reformation of a yod that first developed in December 2012 between Pluto in Capricorn, Saturn in Scorpio and Jupiter, retrograde in Gemini.

Yods are relatively rare and often not particularly long lasting, unless they are between planets that move slowly. In this yod the two social Planets, Jupiter and Saturn and one transpersonal planet, Pluto, were involved.. All these planets are relatively slow movers. So this yod lasted from December 9th through the first 10 days of January 2013. During that time we were being
asked to review what ideas we were basing our beliefs on. And our ideas and beliefs were certainly tested by events that rocked the headlines. In America a shooting in a Connecticut Elementary School required us to look at our ideas around gun violence, the safety of our children and the inadequacy of mental health resources. Half way around the world from Connecticut, the gang rape and beating death of a woman student in India had us looking at our thoughts about power, powerlessness, violence against women and the traditional views that make an incident such as that commonplace.

The only difference between the December/January yod and the current March/April yod was that now Jupiter is direct and Saturn which had been moving forward in the first yod was now retrograde. As the planet of what we believe, Jupiter remained at the business end of God’s Finger, firmly ensconced in the cross hairs. While Saturn, the planet of the hierarchal structure of society, and Pluto, the planet of the powers-that-be and the moneyed few, were getting along fine in their communicative sextile, Jupiter was sweating it out. Jupiter in a irritating inconjunct aspect to these two transformational heavyweights was being tested. Yet because Jupiter was now in direct motion, the latest reincarnation of this yod (March 6th-April 6th) was testing our reworked and possibly progressive ideas. What ideas do we base our beliefs on now? Ad how can we get them to work?

A few days before the Spring Equinox, Jupiter, which was for all intents and purposes on it’s own, got some help. On March 17th, Uranus moved into an orb of influence ad made a sextile to Jupiter. Uranus is the planet which loves nothing more than to upset the status quo. And with Uranus in the sigh of Aries, there is instinctual expression of our being-ness and the introduction of new ‘out of box’ thinking. Suddenly Jupiter had it’s own transformational powerhouse on it’s side. And so began the battle royal between the old guard (Pluto and Saturn) intent on control, and the New grassroots movement (Jupiter and Uranus) bent on smashing the restrictions in our freedom to be who we were born to be.

So where was the explosion?

Well, the addition of Uranus to the mix created a interconnected double yod formation between two of the transpersonal planets, Pluto and Uranus, and the two social planets, Jupiter and Saturn. This acted like two opposing forces of similar strength pushing and pulling against each other.

The transpersonal planets are the edge of our collective evolution, they are the planets that drive the great cultural shifts we see within humanity. This interconnected yod created a cauldron of transformation where very intense energies acted upon the very structure of society and the ideas ad beliefs we have built our society upon. Yet because of the interconnect-ess of the yods, there was not much room for forward movement. It was not unlike having our collective feet held to the fire.

And that fire is hot, and getting hotter!

Just after the last New Moon in Pisces, Mars, the planet of action and the ruling planet of Aries, moved into Aries. When the Sun followed Mars into Aries at the Spring Equinox, we suddenly began to wake up from our slumber. then as each of personal planets entered Aries, one of another, each conjoined Uranus activating the double yod with the energy of the new. Aries is about the ‘I Am’ principle and so we started asking: What about me? Where do I fit into this? When to I get my turn? What about the people?

O April 6th, four days before the Aries New Moon, Jupiter moves out of the double yod configuration. This begins the uncorking of the pressure built up in the previous activations of the double yod and the shift begins to happen.

On April 7th a New cycle of relating begins as Venus and Mars conjoin in Aries. This biennial conjunction starts a two year cycle of relating in a new way. Venus is the archetypical feminine and Mars the archetypical masculine. Our instinctual and self protective natures unite at 20 degrees of Aries. Venus/Mars interactions hold within it the power of procreation, the yin and yang of life. The Sabian Symbol for this degree of Aries speaks of compassion being the way to move through crisis. Compassion, like charity, begins at home. We must be compassionate with our selves (Aries) and move out from there. Energy works on the principle of resonance and in order to have love and peace we must first embody it within.

We are most definitely in a crisis period and ultimately it is compassion that will move us through this time.

And this, my friends is the energetic soil that this latest New Moon is being seeded in. The soil of revolution, the soul of reclaimed our power to govern ourselves. To come to an understanding of our own power and perhaps more importantly, our own responsibility in this situation. And to keep through all the changes a deep and abiding love for ourselves ad others.

On the 10th of April, the New Moon occurs at 21 degrees of Aries. I the New Moon chart there are 5 Aries placement, Uranus, the Sun, the Moon, Venus and Mars. Along with these planets is a minor planet, discovered in 2003, called Eris. Eris is sandwiched between the Sun/Moon conjunction and Mars.

In mythology, Eris was know as the Goddess of discord. It was she who in response to not being invited to a grand wedding, took a golden apple and on it inscribed the words “to the fairest”. She tossed the apple into the crowd at the feet of the three goddesses. The apple was picked up by Paris, he read it and handed it to Aphrodite, causing great discord among Hera and Athena. It was that one act that seeded the start of the Trojan War.

Eris used the other goddess’ vanity against them. Knowing their weak spot and using it to create chaos.

Having this minor planet in the mix is just the kind of spark that can create a conflagration of our situations.We must be aware of being manipulated through catering to our lower nature. This includes the powers-that-be that have everything to lose once we reclaim our own sense of authority and power. And what is the powers-that-be weapon of choice? Fear of course!

Aries is about courage, it is a very instinctual energy, and once the top if blown, there is no going back. Especially with Uranus fanning the flames of revolution. This New Moon moves us into uncharted territory. It is the start of the next wave of change. It promises to be an explosive start to a most assuredly momentous shift in our evolution.