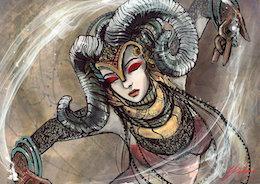 On April 7th there is a New Moon at 19 degrees of Aries. This is a particularly powerful New Moon as the Sun/Moon is conjoined both Uranus and Eris. Aries is the archetype of becoming. The energy is instinctual, forceful and initiatory. New Moons are times of beginnings, a time to set our intention for the upcoming lunar cycle. With Uranus in the mix there is always an explosive and unexpected quality. Add to this the minor planet Eris, in mythology the sister of Ares and the Goddess of Discord, and you have all the ingredients for revolution.

Beginning in 2008 when Pluto moved into the cardinal sign of Capricorn (concomitant to the financial collapse) the structure of our reality began to shift. Capricorn is the sign of reality, it is also connected to power and influence and so with Pluto the planet of transformation moving into this sign we began to experience the rumblings of a great paradigm shift .This shift was begun as Pluto, the planet of death and rebirth moved into Capricorn the sign associated with hierarchical structures of power. The last time Pluto had been in Capricorn, there was another revolution, namely the American Revolution led in part by Thomas Jefferson (an Aries), saw the colonists revolt against the established order (the crown of England) on the basis of taxation without representation.

By 2010 Uranus slipped into Aries and Saturn into Libra and the great Cardinal shift began. By 2011, a literally earthshaking year, Uranus was firmly ensconced in Aries the ‘square dance of Pluto and Uranus began in earnest. By 2012 and through 2015 we experienced 7 exact squares between Pluto and Uranus in the initiatory signs of Capricorn and Aries, completely shaking us to our core, as the pillars of our reality were shifted.

In 2016 there was a marked shift from Cardinal energy into mutable energy as the Nodes of the Moon (our evolutionary growth edge) moved into the mutable signs and a year long Mutable T-square between Neptune/Chiron, Jupiter and Saturn began. Mutable energy is about change, adaptation and mutation. We are at a time when the old way of doing things will no longer work, ‘power over’ politics will only create more destruction. As the old paradigm crumbles a vacuum is formed, and as we know, nature abhors a vacuum, so this space will be filled with something. What that something is depends on how we apply our energy to thisnow amorphous energy that permeates our reality/unreality. We are in a time of great potential where the potential for good is as powerful as the potential for evil. Evidenced in the political race for the US president.

To say we are at a tipping point would be incorrect, we have already tipped, now it’s up to us to direct the flow of energy toward a New Paradigm based on cooperation, as this tidal wave of change ushers in the Aquarian Age. We can no longer ‘control’ things in the old ways, it is more about going with the flow and surfing the waves of change. Intention is paramount on our new journey in the new Paradigm. This New Moon in Aries conjoin Uranus and Eris, square Pluto in Capricorn is all about our intentions.

The Sabian symbol for 19 degrees of Aries is as follows: “A magic carpet”. This symbol according to Dane Rudyhar (an Aries) in his seminal book on the Sabian Symbols is the use of creative imagination as a strife-transcending and unattached outlook upon everyday reality. If we take the Sabian symbols and dig a bit deeper and look to the degree we find Mars (the Ruler Aries and this Sun/Moon/Uranus/Eris powerhouse) we find him at 9 degrees of Sagittarius (the degree that he stations retrograde later this month).Here we have the following symbol: A mother leads her small child step by step up a steep stairway: According to Rudyhar this is interpreted as the need in any social situation to assist the less evolved in their management of problems which requries its members to solve. Light workers take note here.

We have the power of our intentions to create our reality, to transcend the chaos and utilize this opportunity to recreate our world based on the revolutionary principles of cooperation. Over the next decade things will change, the harder we hold on to the old or do it in the old ways, the more pain and suffering we will manifest. It’s time to re-imagine the world. The power is here, the time is now and the people who will do it, is us. Together we can, together we must!