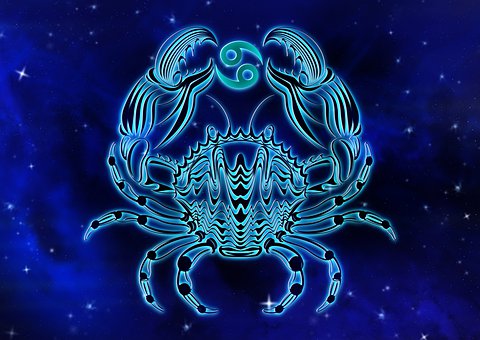 There is a New Moon in Cancer on July 18th-19th at 27 degrees of Cancer. Cancer is the sign of emotional self-reliance and the search for emotional security. The ruling planet of Cancer is the Moon, the most changeable and fastest moving object in the sky. We can actually visually see the changes within the apparent shape of the Moon as she has her monthly lunation cycle to the Sun.

Cancer as a Sun sign is know for it‘s emotional changeability, sometimes described as moodiness. Cancer is all about getting in touch with our feelings. Pluto’s continuing journey through Cancer’s opposite sign Capricorn has give us opportunity aplenty to do just that. And seeing as Pluto will be there until 2024 we have many years of that to come.

Cancer is a cardinal water sign, cardinality is about initiation and water is the element associated with our emotional body. With this New Moon we are initiating new cycles of emotional responsiveness, self-reliance and security.

The chart of this New Moon is a very active one. In fact the two days before the actual New Moon, while The Moon moves through the first 26degrees of Cancer there is a reactivation of the June 24th square of Uranus and Pluto, as Mars fresh in Libra (entered Libra July 3 after 7 months in Virgo) squares Pluto and opposes Uranus exactly. This creates more personal and social instability. So when the New Moon finally arrives we have been tested yet again.

In the New Moon chart Saturn in Libra makes a close square to the Sun/Moon in Cancer. This denotes a time of crisis within relationships, we ask ourselves, do our relationships nurture us? Are we ‘getting enough” or is it even fair to expect from another, what we cannot foster in ourselves?

Initiatory Mars in Libra is still in a tight opposition to Uranus in Aries, further stressing the relationship axis asking us the question what are we responsible for and what is our partner responsible for? Issues of equality and equanimity are in the forefront. This can be seen in interpersonal relationships as well as culturally in the quest for woman’s rights and the rights of people who live alternative lifestyles.

Pluto in Capricorn’s tight square to Mars further emphasizes a crisis in thought around these issues. Just because tradition says so, does it fit our experience. Does it reflect the reality we find ourselves in. What needs to be released?

Political, financial, relational, upheavals along with severe weather patterns crank up the volume on the instability scale, We are being asked to come to terms with our security as that which is apparently outside of ourselves is blowing apart. We are being thrown back on ourselves as we can no longer depend on those things that were always there. It almost seems like some cruel cosmic joke!

Be assured that the Universe does in fact have a sense of humor and a fine sense of irony. As to whether it is cruel or not depends on your point of view.

Unfortunately for most of us we learn our most profound lessons through loss and pain. Although I like to think it doesn’t have to be that way, pie eyed optimist that I am. I rather like to think of it as this: life has bigger and better plans for us than we have for ourselves.

It is of paramount importance to foster within ourselves a sense of emotional security. This comes through self-acceptance, and self love. Finding our emotional security within our own hearts is the path forward. What you will find is that when you no longer judge yourself, your judgment of others disappears. When you relate from within your heart you are loved not for what you do for others, or for how beautiful or rich you are on the outside, but for the mere fact that you live and breath and that alone makes you worthy of love.

In The Course in Miracles it is said that there are only 2 choices: Love or Fear. Choosing love guarantees us that we will move through this time of change with grace, although ease may be a bit more difficult. However staying in fear will most assuredly create for us more hell.

Heaven or Hell, the choice is ours!