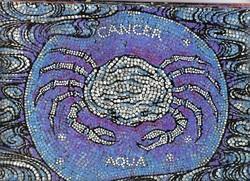 On July 15th there is a New Moon in the sign of Cancer. This NM occurs at 24 degrees of Cancer and is in a square to Uranus in Aries. Cancer is generally a gentle and sensitive sign, yet the energetic soil this New Moon is being planted in is anything but gentle. Uranus in Aries pushes us to move forward and evolve. Evolution means change and although the sign of Cancer is always dealing with the shifting sands of change it’s not necessarily a comfortable situation for the Sun or Moon in Cancer. Add to this an opposition to Pluto which brings up issues of power and powerlessness the sense of being at the mercy of powers greater than ourselves is strong.

We find ourselves in the midst of great cultural, personal, planetary and energetic shifts. Pluto also makes an opposition to Mercury and Mars both in Cancer, illuminating how we think and act and how that effects our sense of power or powerlessness. In fact, the exact opposition of Pluto to Mars and Pluto to Mercury occur just prior to the New Moon today. Both these oppositions are points of awareness and the halfway point of two personal and important evolutionary cycles.

Mars’ opposition to Pluto is part of a two year cycle that began back on November 11, 2014 (Yes 11: 11, for those who understand the symbolism) at the 12th degree of Capricorn. The Sabian Symbol for that degree of Capricorn talks about the need to explore the Natural Law. Because we are dealing with Pluto, the desires of the Soul and Mars our conscious desires, our Soul, and the evolution of our collective Soul is pointing to the Power of Nature. We could continue to see Nature creating all sort of ‘problems’ for us. Yet what is the real problem? Could it be the actions we take that are antithetical to Natural Law? Nature will always win.

The opposition of Pluto to Mercury is also part of a cycle, this one a yearly cycle. The Soul, Pluto conjoined Mercury on December 25, 2014 at 13 degrees of Capricorn. The Sabian Symbol for this degree points to our will to transcend our subjective reality in the quest for ultimate truth. The truth of the matter is seems is that we must live our lives differently. More in alignment with Natural Law. Live our lives with more respect for our planet, for each other and to let survival (An issue close to Cancer’s heart) trump profit (Pluto in Capricorn).

We can see rather starkly, especially in America and Europe how we are being held hostage by private corporations and private banks, that have little to no oversight. The passing of the TPP Trade Bill is an example of the Power of Corporations over the sovereignty of countries and people’s desire and right I may add, to keep the earth from being raped and befouled.

It is time to speak to power and act to power, yet not in the old ways. Anger and vitriol only foster more anger and vitriol. It is more about how we can work together to make our world a gentler and more loving place. It starts with refusing to keep our difference front and center and instead concentrate on what makes us the same. We live on the same planet, drink the same water, breath the same air, and basically want the same things for those we love; food, shelter, security and a chance at a peaceful life.

The Sabian Symbol for 24 degrees of Cancer talks about how complex interpersonal relationships can be and yet the need for Interdependence is tantamount to our survival and ultimate ability to thrive. The power we have working together for the common good is Herculean. Those who are satisfied with the status quo, do not want you to know that. It is time to take responsibility for our own destinies. The time is Now so let’s get going!