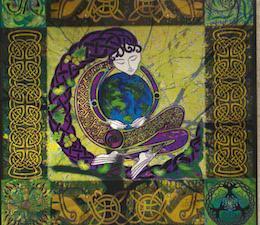 On January 9th we have a New Moon in the sign of Capricorn. The archetype of Capricorn is on of being in charge of your life. Of being an authority figure and utilizing your talents and abilities to make a mark in your world. This New Moon is a very powerful one, thanks in part to its connection to Pluto and Uranus which are closely in aspect to the Sun/Moon at 20 degrees of Capricorn.

Pluto and Uranus are the planets of Transformation and Revolution. They have been battling it out since the beginning of the decade, most notably from 2012-2015 when they made 7 exact squares to each other. These exact aspects helped to disrupt the structure of society and open us up to the truth of who we are, where we stand and what is at stake. These two transformational behemoths will continue to interact with each other well into the next decade, yet now instead of breaking up the old, it’s about creating the foundations for the new.

We keep hearing about a New Paradigm, yet what does that really mean? A Paradigm is a model from which reality is experienced. The old paradigm was a patriarchal one, where might makes right and force is the first action taken. It is this paradigm that has led us to the world we find ourselves in. This might seem quite depressing (another Capricorn archetype) . Yet, what we are truly being shown is the necessity to do it in a different way. Pluto the planet of Transformation is in Capricorn from 2008-2024 so any structures that do not support the New Paradigm will be transformed. Thing is, this will no happen on it’s own. We cannot leave this to fate, for it is time for each one of us to be counted (Uranus in Aries) and to start to act in a mature way (Pluto in Capricorn) and create the New Paradigm through the sweat of our brow and the openness of a loving heart.

The New Moon has supportive connections to both Jupiter and the North Node of the Moon, both in Virgo. The transiting Nodes are in Virgo (north node) and Pisces (south node). They show us what we need to move toward (north node) and what to release (south node). Virgo is the energy of making things work better, as an earth sign it is concerned with practical considerations and in at it’s core Virgo is about being of service. Pisces is the energy dissolution, of escapism, of fantasy and magical thinking. Pisces is also the archetype of the savior. We need to release any magical thinking that promotes the idea of being saved by something outside of ourselves. Whether that be a political figure, religious figure, alien, angel or ascended master. Not to say that these figures couldn’t help us forward, its just that we have to do it ourselves. Each one of us becoming actively engaged in our lives making a difference once step at a time, in whatever way we have available to us. Virgo is not about grand gestures, it’s about small incremental steps that add up to a whole lot of change!

So this New Moon points to each one of us doing our part to make the world a more loving, verdant, livable, compassionate and workable place. With Saturn, the ruler of Capricorn in Sagittarius, just of a conjunction to Venus the planet of essential needs, love and relationship, we must focus on our actions being in alignment with Natural Law (Laws of Nature) above and beyond the laws of men. The laws of men are written by those in power who want to keep the power. The laws of nature are written by life itself. If we want to live, it is these laws that we will have to follow.

There is great upheaval and destruction at this time as well as great opportunity to build structures for the new paradigm. Let’s all grow up, open our hearts and start doing the work we were born to do!