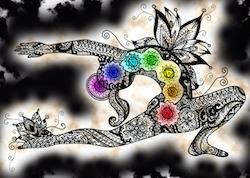 On November 11th there will be a New Moon in the sign of Scorpio. New Moon’s demarcate the start of a new lunar cycle. This New Moon occurs at 20 degrees of Scorpio. The Sabian symbol for 20 degrees of Scorpio states: ‘A woman draws away two dark curtains closing the entrance to a sacred pathway.” This image of a hidden pathway being revealed gives us the idea that we are being invited to move in a new direction. The fact that this New Moon falls on 11:11, a number most often connected with an energetic gateway causing us to ‘wake up’ to our true nature, further indicates an energetic upgrade for humanity. The fact that it is a woman who is revealing the way, points to the feminine function of imagination. Imagination is a powerful tool, as powerful as reason, yet not valued in our patriarchal culture.

One of the tenets of the Aquarian Age is equality. We live in a very unequal world, the most glaring is the strength of the masculine outward force and the repression of the inner feminine force. Feelings are not valued, the Earth is not valued, except as a tool for the powerful to rule through ownership. Who really owns the Earth? Surely not the top 1% of the 1%! Although if we go by the arbitrary accounts and balances of patriarchal society, they do, and they can do whatever they want with it. That is just not so.

Another tenet of the Aquarian Age is people working together for the common good. This too is not supported. In fact we are constantly bombarded by the corporate run media on how different we are. If there is even a small line in the sand between people, the powers that be will surely dig a moat impossible to cross. This only works if we listen.

This new Moon has some powerful allies, the Sun/Moon makes a positive connection to Jupiter in Virgo. The lines of communication are open between us. We all have a lot of information that will prove very helpful as we move into the future. Practical ideas on how to heal our wounds, whether they be physical, emotional, mental, planetary or spiritual and how to move forward from there are bountiful.

A flowing trine from Chiron in Pisces to the Sun/Moon opens us up to each other’s knowledge around healing. It is important to listen to one another, we can learn a lot from each other. Mercury in the sign of deep thinking Scorpio makes a waning sextile to Pluto in Capricorn, giving us the opportunity to change our minds toward a more progressive and Aquarian world view. Even those who would historically chafe against ‘radical’ ideas are making the shift. Check out Bernie Sanders visit to Liberty University on You Tube.

The Sun/Moon along with Jupiter also creates a Yod, an aspect pattern called the Finger of God, with Uranus in Aries. Uranus is a revolutionary force and  in Aries is about freedom. When Uranus moved into Aries and began to interact with Pluto in Capricorn (Symbolizing the Powerful, moneyed few at the top of the hierarchical pyramid) the sparks of revolution took the world by storm. In some places, like Tunisia, new more equal systems of self governance emerged. In other places, complete and utter chaos.

This Yod reminds us that revolution requires small incremental steps, lest our desire for freedom can devolve into anarchy. This Yod also reminds us that it is as important to let go of our attachments to outcomes. No matter how brilliant you may feel your ideas are, they will only be helpful if they can be utilized by society at a pace that society can handle. That being said, people are hungry for change and hungry to feel as if what they feel, think and know is of value. When it comes down to it, most folks just want a fulfilling life. That means different things to different people and there is room for that in the New Paradigm. Once we take unhealthy and unfounded fear out of the picture people will have the capacity to show their true nature.

And lastly, let’s not forget what the Sabian Symbol shows us. One sure fire way to change the world is to imagine it changed. Whether it’s as simple as having more personal resources, a job that you love, a relationship you desire, or a world based on mutual love and respect we must Imagine It So!

And so it shall be.