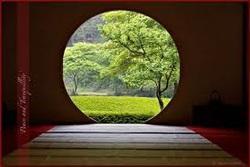 Tuesday, April 29th there is a New Moon in the sign of Taurus. Not only is it a New Moon, it is also a solar eclipse imbuing this New Moon with more power. The sign of Taurus is the associated with our essential needs; food, clothing, shelter and our resources: money; land; assets. Taurus is also the sign of the five senses so this New Moon seeds a new relationship with our resources, our sense of self-esteem and our senses.

April has been a highly energetic month, a kind of watershed moment that was building since the beginning of the year and perhaps even further back then that. No we come to the point where much of the old is passing out of our lives, yet the new is not yet formed. It is at this time that it takes a leap of faith.

Seeds have been planted and now with this New Moon in Taurus it is time to water and nurture those seeds and to have patience with the process of gestation. Where as Aries is the symbol of the little leaves, called primary leaves for those gardeners among you, Taurus is the time for the sprouts to grow a root system to support the long term stability of the plant. Aries is replete with ideas, in Taurus we must thin out the seedlings, and use the limited resources on that which is essential and has the best chance of survival.

The Sabian Symbol for this degree of Taurus is “A fully decorated Christmas Tree” according to the interpretation by Dane Rudhyar this is a symbol of our undying Faith in Cyclic Renewal. The keynote found in his book An Astrological Mandala states: The ability to create inner happiness in dark hours.

For many of us this is not just a metaphorical practice, but an actual one. We have been required to let go of quite a lot. Some of it we were ready to let go of, while others things we were not so willing, yet go they went.

Because this is a solar eclipse the Sun is blocked by the Moon, which means that our past is right in our face, unaffected by the light of the Sun. And with this eclipse being on the South Node of the eclipse, also know as the Dragon’s Tail, there is still some more releasing to be done. Yet the sense of this release is one we choose to make, as opposed to many of the previous releases that we may have been unaware of the need to let go. Even the most aware individuals got their ‘bells rung’ by the sweep of energy in April.

The Grand Cardinal Cross is still present in the heavens, meaning that the door to initiation remains open. A grand water trine gives us access to the healing waters of the Divine.

This New Moon Solar Eclipse is a starting point for us to begin to rebuild our lives, base on new values, ideas & inspirations. It is important to keep things simple, allow them the time to grow and above all open your heart to gratitude. Gratitude is the key to the kingdom of abundance and this golden key is free!