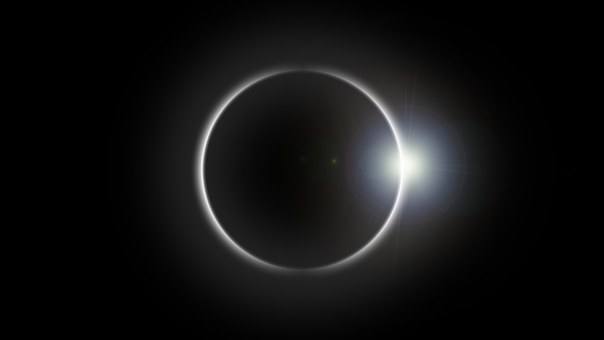 New Moons are points in the cycle of the Sun and Moon when they share the same degree of the zodiac. This occurs on an average of once o month, (sometimes 2x’s a month when New Moons fall at the very beginning and very end of a month.) The cycle between the Sun and Moon, from one New Moon to the next is 29 ½ days.

When the Sun and Moon is New we cannot see the Moon in the evening sky for it is moves with the sun along the elliptic and during the day the Moon is invisible because it is overtaken by the brightness of the Sun’s corona, unless of course there is an eclipse and the Moon is in alignment with the Sun in such a way that it can block out part or all of the Sun. This is the case in partial and total eclipses of the Sun. It is during this time that the shadow of the Moon can “swallow up” the Sun. The study of eclipses and their effects is an deep and ancient study. The ability to predict an eclipse with accuracy was a great power to have in ancient days. If you happened to be the kings astrologer it could be the difference between living a respected life or literally loosing one’s head. Or in some cases, this information was key for the wily astrologer to “get out of Dodge” before the eclipse happened due to the fact that often a Solar Eclipse would predict the fall of a leader, and in those days the messenger was often killed because of the message.

The last eclipse season occurred in June and July of this year (2011) with 3 eclipses at the South Node. South Node eclipses bring us an awareness of what needs to be let go of, what must be released so we can move forward on our evolutionary journey to come to understand ourselves and the world we have created.

This latest New Moon eclipse is on the North Node of the Moon and so our focus will be towards how can we co-create the future. The sign of Sagittarius, the sign of this New Moon, seeks to understand, to create a world view, a philosophy of life. Sagittarius rules philosophy, religion, the right or intuitive brain, as well as foreign shores. Sagittarians love adventure and traveling, as a fire sign it does not like to ‘fenced in’, it wants to explore the world, climb the mountain, fly to the moon, whatever can help it gain a broader perspective on the world. Sagittarius also rules nature and Natural Law. Natural Law is the Law of Nature. Observation of nature can ‘school us’ in understanding of these laws. For example the idea of taking more than we need, is against natural law. Defiling and polluting the very earth we depend on to sustain us is against natural law. Ownership is against natural law while being a conscious steward of the earth is in alignment with Natural Law.

The North Node is the direction of the future, the South Node the accumulated past, over the summer and through the fall we were asked to let go of many things, people, places, possessions, our ideas about relationship, authority, & what security is; all in an effort to pare us down to what is essential in our lives. In part that was a function of the South Node eclipses that occurred in the Summer in the signs of Gemini (thoughts) and Cancer (feelings). The North Node eclipse at this New Moon is asking us to plant the seeds for the future.

The Chart for the New Moon is very interesting and can give us some clues as to the energies we will be working with for the next 6 months at least. The Sun and Moon at 3 degrees of Sagittarius are in a stressful square to Mars in Virgo. Squares connote crisis, and crisis has a way of bringing us into the present moment to deal with our situation. Mars in Virgo is about working through the details, Sagittarius is the big picture, so the seeds we plant on this New Moon for the future, are not of the ‘set it and forget it’ kind, they will need constant care and oversight. Freedom, another Sagittarius theme cannot be lasting without attention to detail (that is why Virgo comes before Sagittarius in the zodiac). True freedom is hard won. And we will have plenty of time with details, because in 2012 Mars will go retrograde in Virgo and spend a whopping 8 months in the sign of Virgo (November 2011-July 2012).

Jupiter the natural ruler of Sagittarius, and for you astrologers out there, the ruler of the eclipse, is in Taurus retrograde. When planets are retrograde, it a time of review, a time to throw off any beliefs (Jupiter) about our resources(Taurus) that are not true (Sagittarius). Jupiter has been retrograde in Taurus since August 30, 2011 and within less than a month people began occupying Wall Street. And as the retrograde has continued we are becoming more and more aware of who holds all the money cards, incidentally Taurus rules money. This Taurus retrograde concludes on Christmas Eve and starts moving forward on Christmas. It will be interesting to see what our Christmas presents will be this year, as people come to terms with what is truly important in life. The archetype of Santa Claus is Jupiterian, all I can say about that is that the Universe has a great sense of humor!

Jupiter in Taurus is inconjunct (150 degree geometric relationship) to the New Moon. Inconjuncts are always aspects of adjustment. Both mental adjustments and emotional adjustments need to be made in our relationship to our resources. Jupiter in Taurus is also involved in a Grand Earth Trine (3 or more planets or points in a flowing aspect to each other creating a triangle of energy) with Pluto in Capricorn and Mars in Virgo. Grand trines, such as this one work in the background as freely flowing energy it can be easily accessed but it must be accessed so we have to take the action. Transformation(Pluto) in the distribution of Money (Jupiter in Taurus) as long as we pay attention to the details and take small systematic steps (Mars in Virgo) can help us to create a new paradigm around money and resources. The simple act of moving your money from a large ‘too big to fail’ bank and putting it in credit unions or locally and state backed banks is a simple yet powerful step to reclaiming our power. In the US chart for the New Moon this Grand Trine is happening in the Water houses, the Water houses deal with our feeling nature and our emotional security, so as we take steps to transform the physical we are also accessing our inner selves. Ultimately we are being asked to evolve our emotional body and get in touch with not just our outer resources, but our inner ones as well.

And lastly, but surely not least, the Planet Uranus aka the Great Awakener in Aries, is in a flowing aspect to the New Moon. Uranus holds the energy of revolution, Aries the energy of new beginnings so there is plenty of juice for us to create the changes that are necessary.

This New Moon is an opportunity to begin the process or self-responsibility and self-reliance that can move us forward into a more equitable future. A review of our actions, our values, our resources, and our relationship to the planet are all part of the picture. The seeds of transformation are sprouting, it is up to us to nurture them, for they shall feed us all, on all levels.