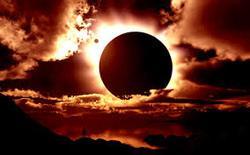 These eclipse ‘seasons’ occur six months apart. Back in March we had the first eclipse season of the year and now starting with this New Moon Solar Eclipse in Virgo we start the next eclipse season. Eclipses at the South Node of the Moon (the March Eclipses) require us to release outworn ways of reacting and responding to life. Eclipses of the North Node (September Eclipses) require us to move forward into an unknown future.

Both letting go of the old and moving forward without really seeing where we are going are certainly challenging, yet we are in the midst of such a transformational time that for some this is just another step in a process of seemingly endless journey of constant change.

The New Moon in Virgo points us in the direction of discernment and service. Virgo is a Mutable Earth Sign, making it both practical and changeable. We are willing to fix things in Virgo, so that whatever we are focusing on becomes more efficient. Virgo is also associated with health. So this New Moon is a great time to start a new health regime. Wherever this eclipse falls in your natal chart will depend on where in your life you will experience this new direction.

Virgo can also the archetype associated with crisis. Whether it be a health crisis, or a work crisis, or a relationship crisis, whatever area of life we have been ignoring is fertile ground for the crisis to occur. You can be proactive in this regard, yet rest assured if you choose to continue to ignore the ‘elephant in the room’ you will certainly suffer the consequences.

The chart for the New Moon gives us a glimpse of some of the more significant challenges and opportunities of the very potent time. The New Moon is opposite Chiron in Pisces. This oppositions brings awareness to and gives us perspective on the Chironic theme of wounding. In mythology Chiron was a great healer/teacher that was accidentally injured by a poison arrow. Because he was part divine (his Father was Zeus) he was immortal so the wound he received could not kill him, it only made him suffer. Eventually he was granted release from his body and he took his place in the heavens as the great Archer of Sagittarius.

Within Chiron we see the wound, yet within Chiron we also have the cure. The wound of Chiron in Pisces is the wound of separation from Source itself. Yet separation is an illusion. We are all part of the same whole, yet we yearn to be return to “heaven’ so not to suffer the slings and arrows of physical incarnation. One of the greatest paths to healing is through the healing of others. As others are simply a reflection of ourselves. Take steps to help one another on both physical levels (Virgo) and spiritual (Pisces) levels. The Virgo/Pisces axis is that axis of Healing. Next month the transiting nodes will be moving into Virgo(NN)/Pisces(SN) after 19 months in Libra(NN)/Aries(SN). So we have lots of time to work with this energy. Not to mention that Jupiter is now in Virgo for the next year. Jupiter expands any archetype it touches so opportunities of healing come hand in hand with crisis.

This New Moon is also in a very close aspect to Uranus in Aries. Uranian energy is erratic, chaos producing, yet ultimately freeing. Uranus is the planet that frees us from the known, and opens us up to a broader more transpersonal reality. Seen as the higher octave of Mercury, Uranus breaks us from the outworn structures of reality while giving us access to our Higher Selves. The aspect between the New Moon and Uranus is one of irritation. Uranus in Aries wants ultimate freedom, yet the New Moon in Virgo reminds us that adjustments must be made in order for us to work together.

As we look around we see much chaos and suffering, it would be easy to get overwhelmed, yet Virgo is the sign of step by step, take care of one thing at a time. Allow yourself a few mistakes, for as we all know we learn most profoundly from our mistakes. Avoid perfectionism, the shadow side of Virgo, and no matter what keep on, keeping on. We can move through these uncharted seas, with love in our heart and a well thought out plan!