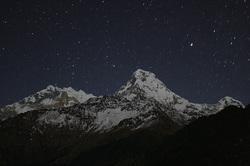 The Full Moon of November was a Full Moon in the sign of Taurus. Generally I write something days or even weeks before an event and share my understanding of the astrological cycles with those who follow me. This Full Moon however, eluded me. It wasn’t until the Moon was actually full, that it communicated with me. So this article is less technical and more experiential. I hope no one minds.

On the night of the Full Moon I had a Guided Meditation group at my Center. I called it a Full Moon in Taurus Guided Meditation Class. As a rule I don’t plan what I’m going to say or where we are going to go. I talk to the participants, get a feel for what has been coming up for them and open to my guides who guide me and in turn I take my ‘peeps’ on the journey with me.

We did some slow deep breathing and pictured the Full Moon high in the sky with her soft luminescent rays bathing us in an ethereal glow. We filled ourselves with her light connecting with both the Galactic Center and the core of our Mother Earth. Once the circuit was made (my guides’ words, not mine) we were ‘taken’ to the top of the Himalayas where the moonlight shone on those sacred mountains. Then my guides spoke through me saying:

‘You are the ancient of ancients, you’re connection to this earth is very old.’ These words were spoken slow and deliberately and as I uttered them to the group, I was filled with such a sense of fullness, my eyes filled up with tears. I felt between myself and the earth a deep abiding love that was so awesome I could barely breath to speak it.

Then in my mind’s eye I was shown a eye a giant Vesica Pisces the center of which was filled with stars. It was the birth canal we have taken into manifestation. I could sense the strength of the Mother, the strength of the Feminine and the Timelessness of it all. It struck me in that moment just how wounded the feminine is at this time. How instead of celebrating the miracle of birth, the wisdom of the earth, and the unconditional love Mother Earth has for us, we defile her and her daughters. Making being female dangerous, less than and sinful. I realized the insanity of our modern day, that instead of celebrating the gift of life, we were trying our best to destroy it. All this coming to me in a moment.

Now I admit I am a student of Women’s psychology, Feminist literature and a born-again pagan, yet it wasn’t until this particular meditation that it penetrated into my bones. Before it was a mental exercise, a search for meaning, in a world that seemed to have forgotten something. It is no longer a theory, but a visceral and cellular connection that goes to the depth of my own issues of self-worth.

The Full Moon in Taurus is a time of awareness, with the Moon in Taurus and the Sun in Scorpio the axis of Life and Death is activated. This Full Moon occurred at the 15th degree of the fixed signs Taurus and Scorpio. This is the most fixed point of the fixed signs, this is our connection to Earth and corresponds with the cross quarter days of Beltane and Samhain in the Pagan Calender. This New Moon illuminates us to the facts that we are responsible for the situation we find ourselves in by devaluing the feminine. It’s no coincidence that in the areas where women are the least equal, we see the most pain, suffering and violence.

This Full Moon also brings awareness of our resources and our shared resources and the unfairness that ownership breeds. We have an erroneous idea that we can ‘own’ land, when we are simply the caretakers of the land. And frankly we are doing a terrible job of it as a culture. Ecological catastrophe is only decades away, if we continue on the trajectory to are on. The earth will survive, we however will not. And you might think that Mother Earth would be happy to be rid of us, yet I can tell you from the core of my being that Mother Earth loves All her children, even us. Isn’t it time to love ourselves enough to make the choices that support life, instead of annihilation?