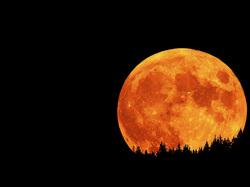 New Moons are times of new beginnings, when the Sun and Moon share the same degree of the zodiac. Aries is the sign of new beginnings and with 6 planets in Aries on this New Moon literally explodes onto the scene. The Sun and Moon and 13 degrees 29 minutes of Aries is in a tight conjunction with Jupiter in Aries. Opposite this triple conjunction is the planet Saturn at 13 degrees 54 minutes of Libra. Saturn and Jupiter are fresh off their last exact opposition (March 28th) keeping us from getting too carried away with our grand plans. Saturn reminds us of how our actions affect others. Mars, the ruler of Aries , is in Aries conjunct Uranus at 1 degree creating an explosive combination. Mars wants forward motion and Uranus blows up whatever impedes progress. Because this conjunction is so close to the Aries point, these actions will have world wide repercussions.

Mercury, the last planet in Aries is actually in retrograde motion. According to Soul Centered astrology Mercury is the ruler of Aries. Mercury being a direct connection to spirit and so with Mercury retrograde answers come from within. Our Souls are speaking to us, it is time to listen.

The day after this New Moon on April 4th, Neptune the planet of Unity Consciousness dips into the mystical waters of Pisces (April 4th -August 5th, 2011) furthering the theme of new beginnings.

The energy of this New Moon can create further chaos and upheaval or it can open doors to higher levels of consciousness. The mere rapidity and scope of the changes that have occurred just since the last new Moon in Pisces on March 4th, points to the speeding up of our conscious evolution. According to Carl Johan Calleman, a scholar of the Mayan Calendar and the author of The Mayan Calendar and the Transformation of Consciousness, we are moving through shifts in consciousness every 20 days which began in February of this year. Shifts in consciousness that would take a generation (20 years) to be realized, began to speed up from 1999-2010 to 360 days, has now further accelerated to 20 days. So we are experiencing major energetic shifts within our lives every 20 days. At this rate of change it is near impossible to do anything besides bear witness and become aware. Many of the challenges we face seem to be “out of our hands” but are they really?

The Mantra for Aries is I am. This new moon can be the birth of the I AM consciousness within each and every one of us. When we become aware of the I AM we can only inhabit the present moment. It is not the ‘I was’ or the ‘I am going to be’, it is the simply ‘I AM’. With 6 planets in Aries: The Sun, our self-consciousness conjoined to the Moon, our subconscious or biological consciousness, conjoined Jupiter our Higher Self. Mercury, our conscious mind, retrograde asking us to go within for answers. And Mars, our drive to be conjoined Uranus, Cosmic consciousness, brings forth a new awareness of who we really are. What explodes on the scene of this New Moon is our realization that if we work within the present moment with the realization that we are all one (thanks to Neptune moving into Pisces) we can co-create a New Earth. Giving birth to a New Paradigm of Conscious Co-creation. Knowing from the deepest and highest parts of our selves that we can in fact create our own reality through our thoughts, feelings and actions.

We are the ones we’ve been waiting for.